“You know you’re a ____ if” lists and “20 things about _____” articles are popular right now. Being bullet point style, they’re easy for Millennials to skim, and they appeal to our sense of identity. Inspired by these attractive albeit shallow articles, I’ve constructed a list of New England identifiers.

Not all of these apply to me personally, having been socialized in Evangelical circles and a private Christian school in Connecticut, but I’ve seen or experienced nearly everything on this list. Keep in mind that these are generalizations and that most of them center on Connecticut.

I could read into many of these and write full blogs for almost every bullet point, but I’ll limit my analysis in this blog and let you get into that in the comments below. 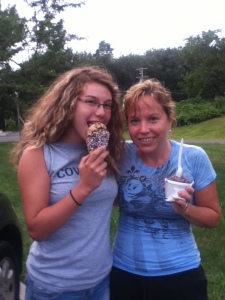 Eating dairy free ice cream with my mom in Cheshire, CT, the month before I left for college in the Midwest. Summer 2013.

Spending the end of my time in CT with my dear friend Mia, who is 3/4 Italian and 1/4 Scandinavian. I’m English, Scottish (my dad’s side of the family, so the Connecticut side), Irish, French and a tad bit German (my mom’s side of the family from Philly). August 2013.

My friend and I parting ways after attending a yearly Christian summer camp in Massachusetts. August 2013.

Saying goodbye after visiting some of my cousins in CT, who share my appreciation for Country 92.5 FM. May 2014.

One thought on “A List of New England Things”