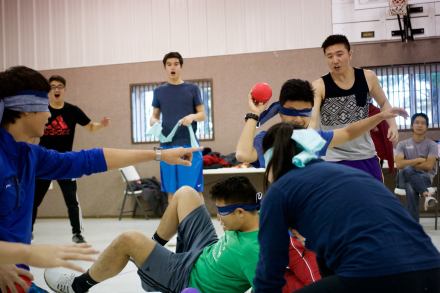 Ever since I came to Wheaton, students and staff have been criticizing Koinonia, the Asian and Asian American fellowship on campus, for being exclusive. A few people, some of whom I know and love, have had bad experiences in the group, and many students make assumptions about it based on what they viewed as Korean cliques on campus. But I’d wager many of these critics have never gone to an event or taken the time to know the purpose and people of Koinonia, which incidentally is composed of much more than Koreans.

I have been participating in Koinonia Large Groups for a couple years now, ever since Michael, my American friend of Chinese descent, invited me, an American of European descent. I’d like to tell you about the organization and its events to correct any toxic notions floating around campus. To start, Large Groups happen monthly. We usually play crazy fun, often awkward ice breakers – real ice breakers that create laughter and gleeful memories, not the basic what’s-your-name-and-major kind. We munch on snacks. We listen to a speaker share his or her testimony or speak on a given topic. (This last Saturday two Wheaton staff held a conversation on intercultural relationships.) The praise team often leads us in worship as well.

That’s why I fell in love with Large Groups last year—the worship. The prayer over and among us and the music we all sang together was powerful. Tangible. The organization also has Saturday morning prayer from time to time, and it begins each school year by praying over each class. I love how Koinonia prays. 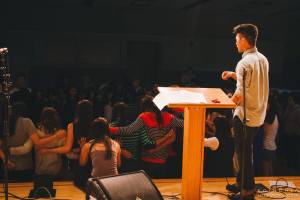 Koinonia also has the best fundraisers (better even than Mu Kappa’s, I regret to say, although our campus-wide game of Espionage is pretty epic, so be sure to join us in that this spring. Yet Koinonia is smart—I mean, who can resist bubble tea? Twice? Not me…and the Pepero sale is about to start—#sharethelove #withthispoorcollegegirl. 😉 )

The organization offers multiple activities throughout the year such as the Fall Retreat, Under-Upper Football and Family Group Olympics. Family groups, another name for small groups, generally meet weekly to establish close knit communities under the larger umbrella of Koinonia. Koinonia also hosts the annual Lunar New Year Festival, which was one of my favorite events freshman year. If you read my article for the Wheaton Record that year, you could not have walked away feeling excluded; the then-president made it his mantra that the event was open for the entire campus!

So why does Koinonia get such a bad rap? It’s one of the largest organizations in the Office of Multicultural Development, and Asians are the largest racial category on campus, so perhaps it’s simply better known. But it seems better known in name than in heart.

Last year’s president, Jen Fu, did a fantastic job of making me feel wanted in Koinonia, and this year I have several friends on Cabinet. I’m as involved in Koinonia as I can be without being in a family group. And as a participating member of the group, I would be blind if I overlooked the mission of this year’s Cabinet in relation to engaging with the broader campus. The Cabinet wants Koinonia to be a support base for Asian students yet not be these students’ entire collegiate world.

One last thing: Friends generally become friends because of some commonality. In sociology we call this homophily. In a place where one may be the minority, racial or cultural similarities can be an extra draw. Everyone needs friends who can understand each other. I rejoice that Koinonia is a context where a racial minority group in the broader U.S. society can come together in a sort of ethnic enclave and actually have power and can celebrate its various cultures in a safe space. This homophilous group only becomes cliquish and thus sinful when it excludes others. For example, white students group together all over campus. Why then do many people pick on the minority for this?

Kois have fun at the 2015 Fall Retreat
PC: Wheaton Koinonia

I beg these critics to stop picking on the organization of Koinonia, other Asians or Asian Americans and specifically people of Korean heritage, who tend to be pegged as the most cliquish. Please examine your own friend group. Look for a plank in your eye before you point out a speck in another’s. Being composed of humans, Koinonia is not perfect, but the accusations against the organization no longer seem appropriate.

The Koinonia of today is vastly different than the one about which I’ve heard decade-old stories. If you have accused Koinonia of being exclusive, you should come to an event some time. See what it’s about. Break out of your own groups, and break the double standard that minority students cannot group together but majority students can. If you’re not Asian, getting to know people in Koinonia is a way to value other cultures, to learn about God’s beautiful diversity and to work towards multiculturalism for all. (And if you know me, you know I’m a strong proponent for multiculturalism!)

I plead with you to respect Koinonia and the people in it and to give the organization a chance before you judge it. Do not perpetuate incorrect, negative assumptions and stereotypes about other Asians on Wheaton’s campus either. As for Koinonia, the organization boasts phenomenal people who are truly building up Christ’s church. I ask you to do the same.